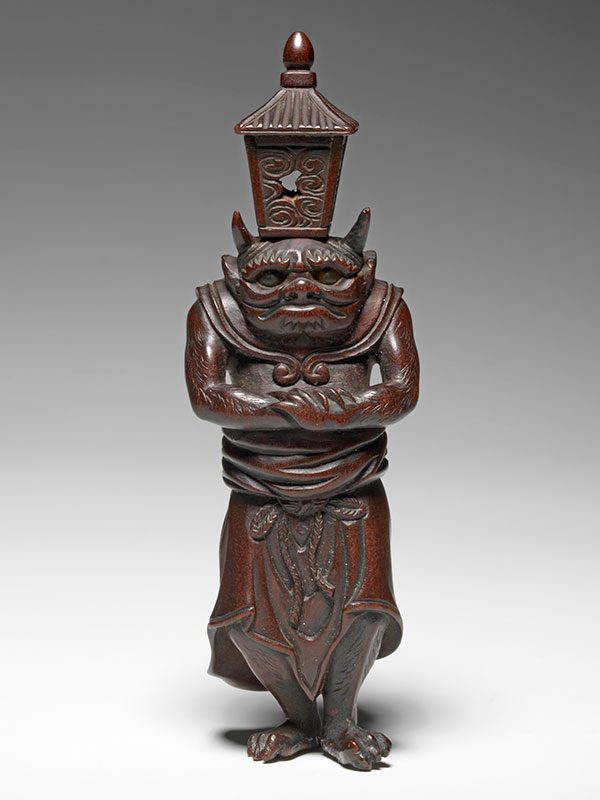 A wood netsuke of Ryūtoki (龍燈鬼, ‘celestial lamp’), the demon with his hands folded across his stomach and balancing a lantern on his head. His simple robes are tied at his waist and he wears a short cape around his shoulders. His eyes glower with comical threat and two point horns jut up either side of the lantern, which is decorated with a swirling cloud motif. The himotoshi is formed by the end of his broad sash.

Ryutoki is one four jaki, the miniature demons who support statues of the Shitenno (Four Kings). Often just two are represented: Ryutōki with the lantern on his head and Tentōki who hold a lantern aloft in one hand. Legend recounts that the pair were evil mischief-makers, but the trampling feet of the gods crushed outthe bad spirits and caused them to repent. The lanterns offer light for the road ahead of the Buddha and testify that the Four Kings are capable of banishing evil. A renowned pair of sculptures representing the pair is at the Kofukuji in Nara, the Ryūtōki the work of Koben, one of the four sons of the great Kamakura sculptor, Unkei. 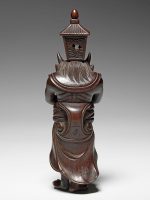