A four-case inro depicting the warrior Minamoto no Yoshimitsu seated beneath a pine tree playing a sho (a type of reed instrument). The full moon illuminates the wintery scene and the reverse shows a pine and flowering plum growing from the rocky terrain before Mount Ashigara, the northernmost peak of the Hakone caldera.

Yoshimitsu the younger brother of Yoshiyiie, was taught a particularly beautiful secret melody on the sho by the celebrated master Toyohara Tokimoto. Leaving to join his brother in battle in the far north, Yoshimitsu grew afraid that he might be slain and that the tune would be lost forever. He thus resolved to take Tokimoto’s son, Tokiaki, part of the way on his journey and to teach him the tune by moonlight. 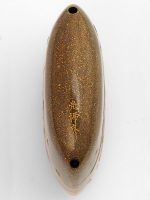